For athletes all over the world, representing their country on the international stage is the dream. The epitome of many sporting careers is lifting their sport’s most prestigious trophy for their country. To many athletes, these trophies and what they represent are priceless.  However, everyone knows that Olympic medals aren’t actually solid gold. So, what exactly are some of the world’s greatest sports trophies made of and what are they really worth? Here’s a look at the top 10 most expensive…

Probably the world’s most prestigious and expensive trophy. Awarded to the winners of the FIFA World Cup, the names of winning countries are engraved on the bottom of the trophy. The original trophy, the Jules Rimet Trophy, featured the Goddess of Victory. The current trophy, the FIFA World Cup Trophy was introduced to replace the Jules Rimet Trophy in 1974. The new design depicts two human figures holding up the Earth. The Jules Rimet was made from gold-plated silver, but the 1974 version is made from 18-carat gold mounted on two layers of malachite. The trophy’s had an eventful history. From being hidden in a shoebox under a bed during World War II, to being stolen, recovered by a dog called Pickles, and then stolen again in 1983, never to be seen again. When it was first made, the trophy cost $50,000 but these days is valued at about $20 million. Small wonder, the winning side only receives a gold-plated replica. 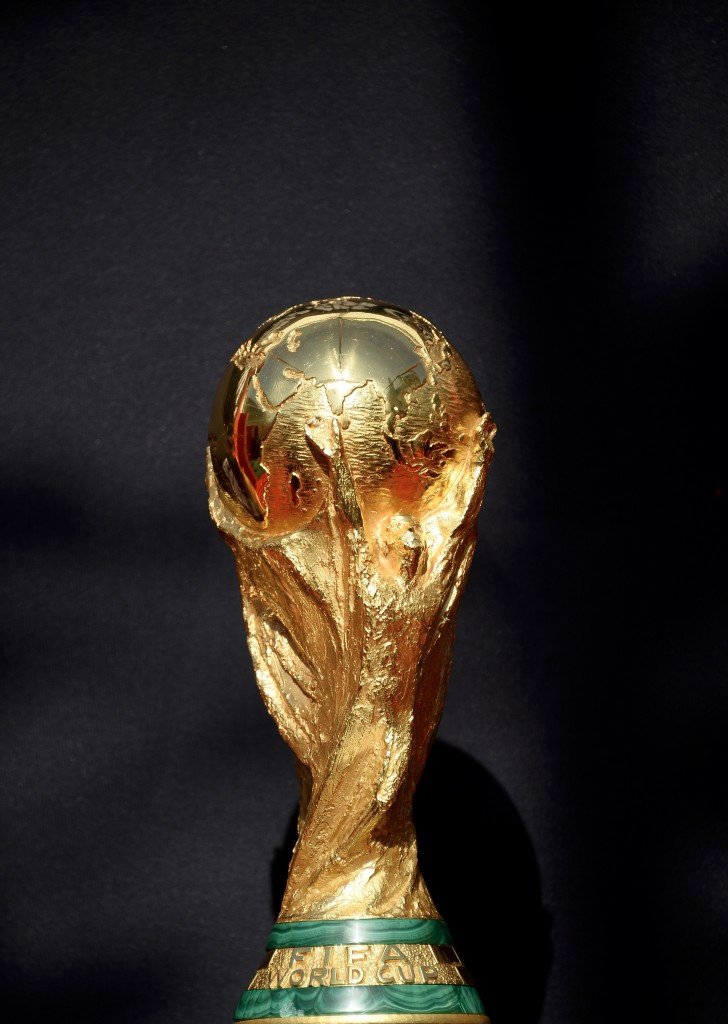 Standing at 36 inches tall and weighing 30 pounds of solid sterling silver, this trophy has a colourful history. The trophy is annually presented to the winner of the Preakness Stakes, the second leg of America’s horse-racing triple crown. Created by Tiffany and Company of New York in 1860, the Woodlawn Vase was first awarded in 1861. The subsequent outbreak of the American Civil War led to the vase being buried at Woodlawn Farm in Kentucky, lest it be discovered and melted into shot for the Confederate Army Soldiers. The competition began again post-war in 1866 and until 1953 the trophy was taken home for a year by each winner between competitions. The bullion value is around £5,000 but its insurance value is said to exceed $2.5 million. Unsurprisingly, the original trophy is now kept at the Baltimore Museum of Art in Maryland for safe keeping and escorted each year to the Preakness Stakes by the Maryland Army National Guard Soldiers and Air National Guard Airmen. 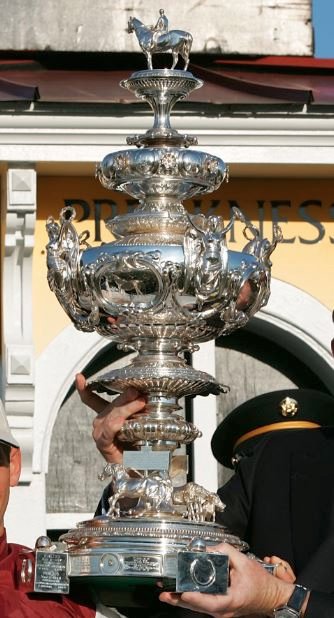 Probably the biggest trophy in sport, the Borg-Warner Trophy stands 1.625 m high and weighs 45 kg. On the top of the trophy is a naked man (after the tradition of Ancient Greek athletes) waving a checkered flag. The trophy is awarded to the winner of the Indianapolis 500 and was first presented in 1936. When commissioned it cost a then whopping $10,000 but is now reckoned to be worth some $1.3 million. Made from sterling silver, the trophy is actually hollow and is unique in that a sculptured image of the winning driver is added to the trophy every year. The Trophy is also inscribed with each winner’s name, year of victory, and average speed. Since 1988 winners have received a 460 mm replica, known as a ‘Baby Borg’. 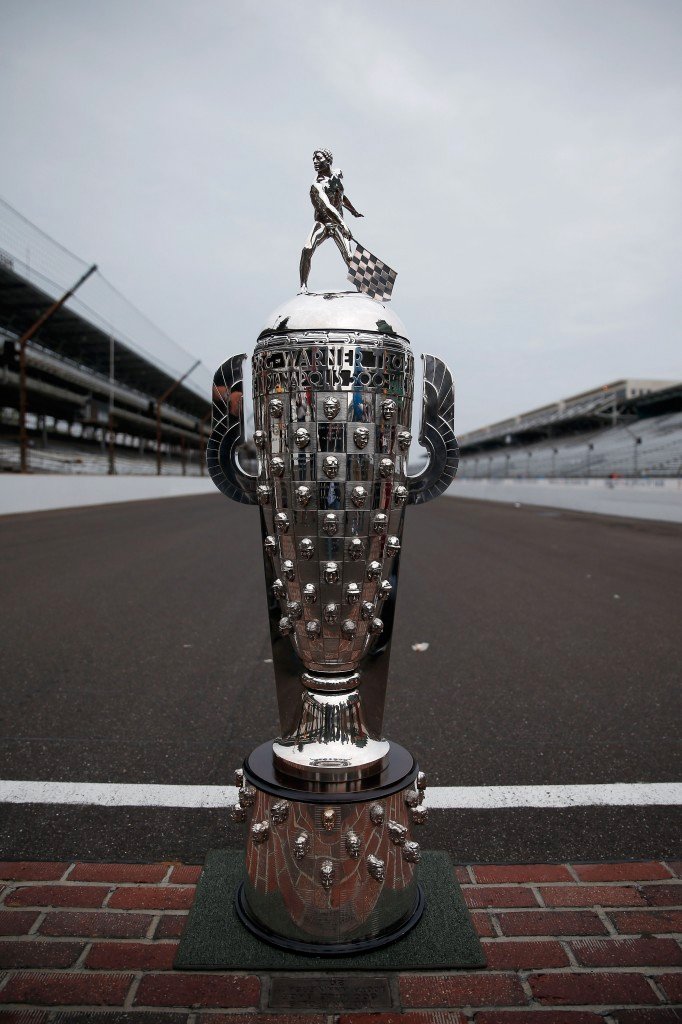 The FA Cup is presented to the winners of the world’s oldest association football competition. Since the tournament began in 1872, there have been five trophies. Costing £20, the first trophy was stolen in 1895 from a Birmingham Shop where it was being displayed for fans to view. A replica of the stolen cup was created in time for the next tournament. After Manchester United won the tournament in 1909, they made their own replica. Realising they didn’t own the design copyright, the FA commissioned a new design, the one we recognise today. The larger, newly designed trophy was made in time for the 1911 Cup final. Trophy number three stayed in circulation until 1992, when it was retired to preserve it. An exact replica was created, but in 2014 trophy number four also needed a replacement due to damage. The current trophy, number five, remains the same height (61.5cm) as the 1911 and 1992 versions, but is a lot sturdier than previous trophies, weighing in at 6.3kg of sterling silver. 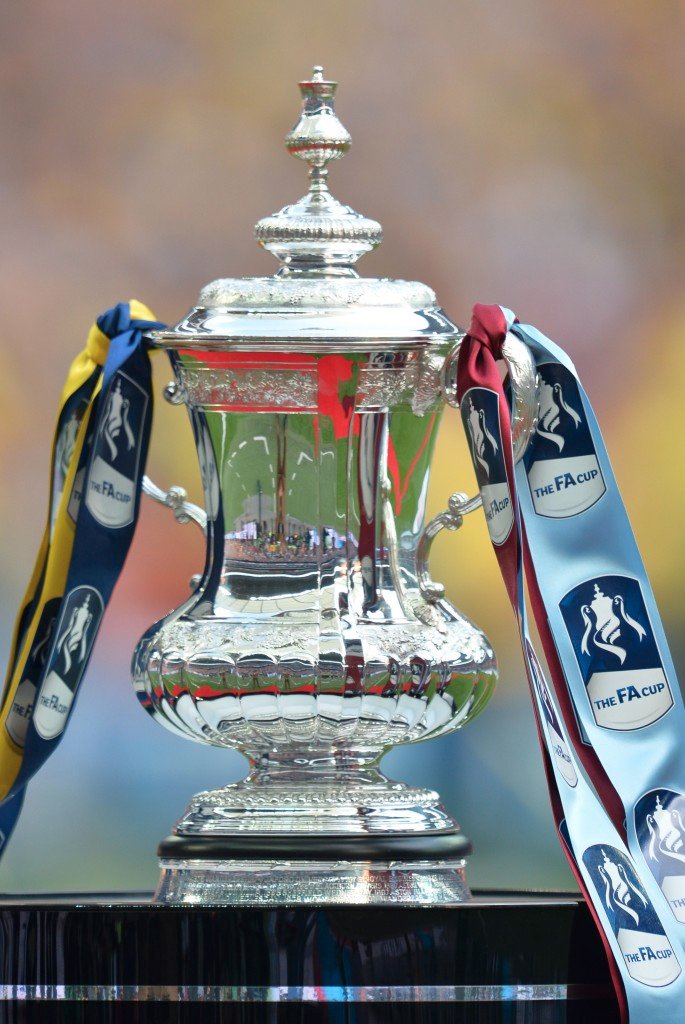 Height: 89.5cm
Weight: 15.5kg
Made from: Mixture of silver and nickel alloy

The Stanley Cup is the oldest existing trophy to be awarded to a professional sports franchise, dating back to 1892. It was donated to Canada’s top amateur ice hockey side by Lord Stanley of Preston, then Governor General of Canada. In the early years, the Cup was played for on a challenge basis as the leagues in which competing sides played had no play-off system. By 1927, however, the NHL had formed and included teams from both the USA and Canada. The Stanley Cup became the premier prize. Since then, the Montreal Canadiens have won it a record number of times and are the most successful Canadian-based team in the competition. Whilst the Detroit Red Wings have won it the most of any United States-based team. Teams are traditionally awarded the Cup on the ice but do not get to keep it. 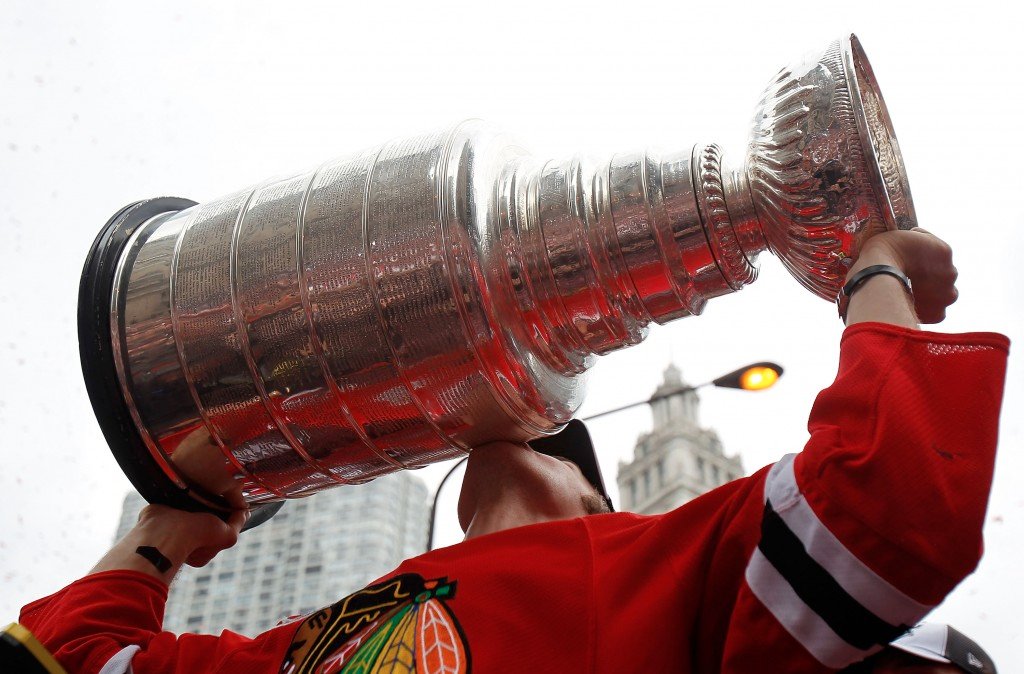 The only trophy on our list to be recreated each year and presented to the winning team to keep, this trophy is awarded to the NFL Super Bowl champions. Named in NFL coach Vince Lombardi’s honour, it is recreated from scratch every year at a cost of $50,000. The trophy is the second on our list to be designed and created by Tiffany and Company of New York. At nearly two feet tall and shaped like a kick-ready American football, it is made from sterling silver and takes four months to complete. After the final gun sounds, trophy is presented to the winning team, then sent back to Tiffany to be cleaned and engraved with their team name, the date and final score of the Super Bowl. The trophy is then returned to the champions for them to keep. And which team has the most Vince Lombardi trophies? That honour goes to Pittsburgh Steelers with a total of six to date. 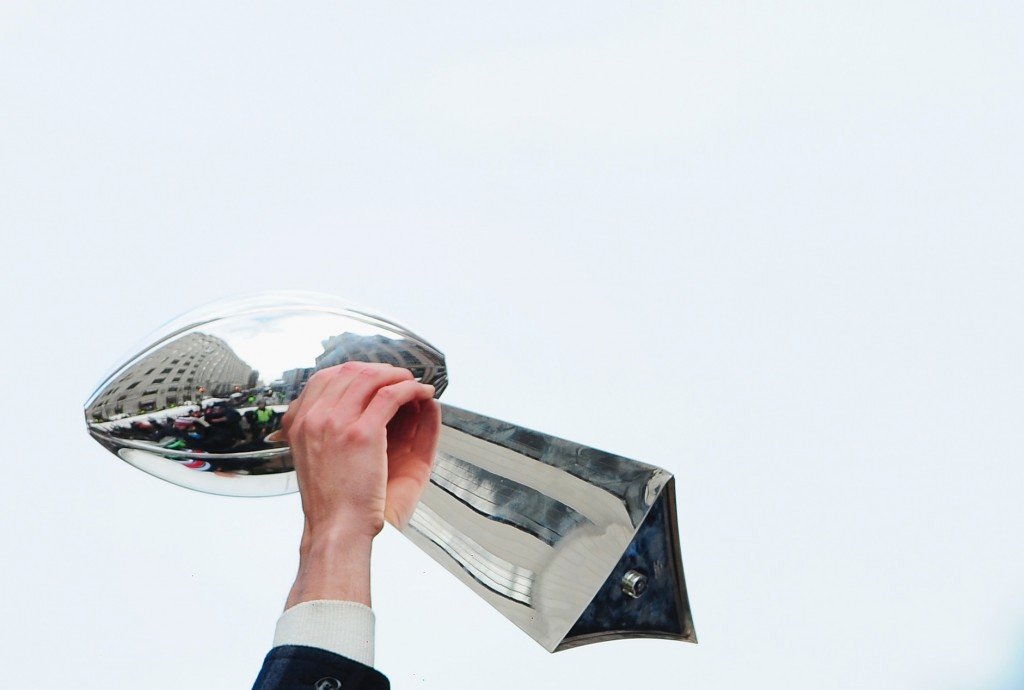 This trophy is presented to the winners of the Cricket World Cup finals, which takes place every four years. The current trophy was created for the 1999 championships and was the first permanent prize in the tournament’s history. Before this, different trophies were made for each World Cup. The current trophy took a team of craftsmen two months to create, and depicts a golden globe held up by three silver columns. The three columns represent batting, bowling and fielding, the three fundament aspects of cricket. The names of previous winners are engraved on the base of the trophy. The original trophy is kept by the International Cricket Council in their Dubai offices. Whilst a replica is awarded to the winning team for their trophy cabinet.

Awarded to the winners of the UEFA champions league, the present trophy is not particularly attractive but is the ultimate prize in European club football. Before 1968 clubs could keep the trophy after a total of five wins or three consecutive wins. As a result, Ajax, Barcelona, Bayern Munich, Inter Milan, Liverpool and Real Madrid all have a version of the cup in their trophy rooms. However, since 2009 Champions League winners have not kept the real trophy, which now always remains in UEFA’s keeping. Instead, a full-size replica trophy is awarded to the winning club with their name engraved on it. Additionally, each player from the winning team is presented with a gold medal, and each player from the runner-up team is presented with a silver medal. A total of 40 gold medals and 40 silver medals each tournament.  However, the real value to winning clubs is the prize money which comes alongside the cup, with the winning club set to win €108.9 million! 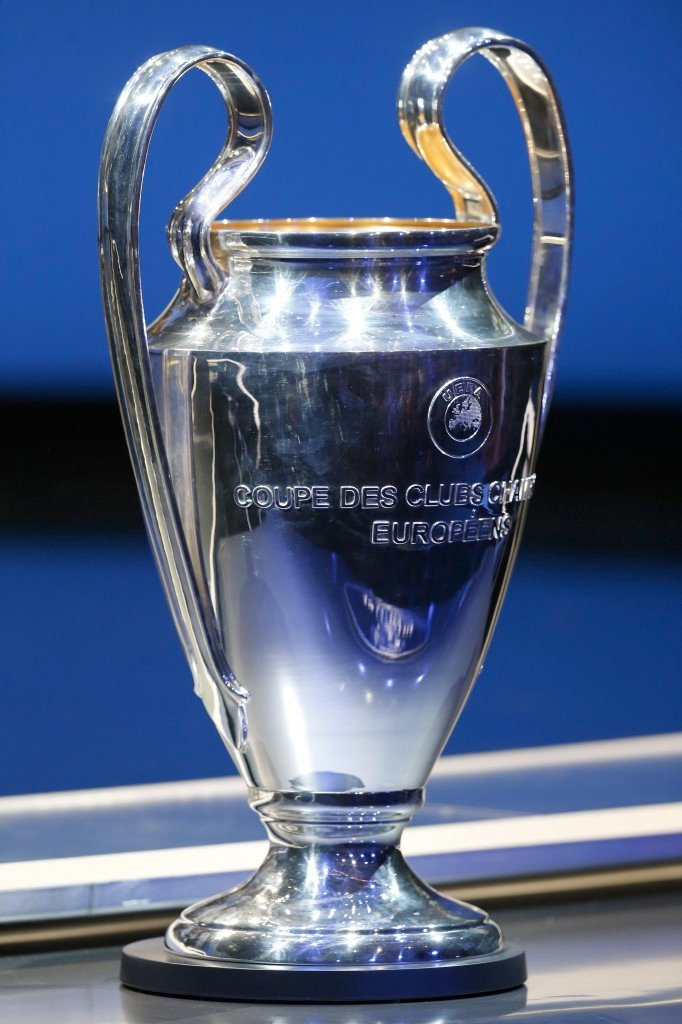 Probably the world’s most prestigious football league, the Premier League came into being in 1992. The design of the Premier League Trophy is based on The Three Lions of English Football. Two of the lions are above the handles on either side, and when the captain of the title-winning team raises the trophy, and its gold crown, above his head, he becomes the third lion. The base of the trophy is made from Malacite, a semi-precious stone found in Africa, with the green colour of the opaque stone representing the field of play. The value of the silver the main body of the trophy is made from is around £3,700. But like all trophies, its true value lies in the glory of winning it. There are actually two Premier League trophies, the authentic trophy and the replica. The authentic one is kept by the current champions whilst the replica is used if there’s a chance two different clubs could win the Premier League on the final day of the season. 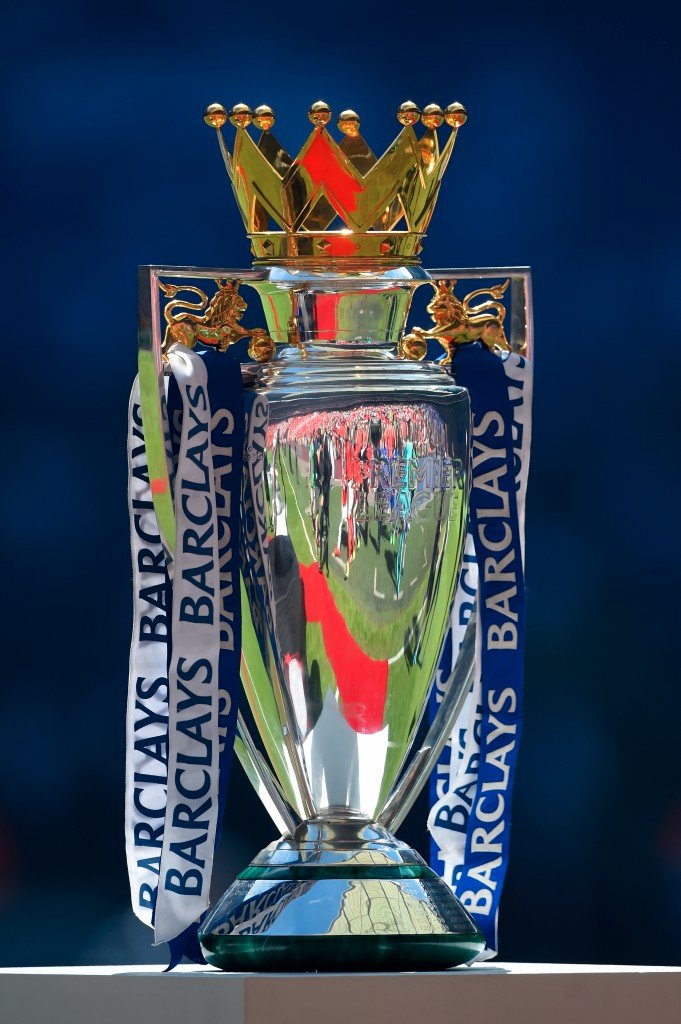 The America’s Cup is one of the oldest and best-known trophies in international sailing yacht competition. Awarded first in 1851 to the schooner America after it won the Royal Yacht Squadron’s annual Isle of Wight regatta, the America’s Cup is named for its first winner. The Auld Mug, as it is affectionately known, is a sterling silver ewer that was created by Garrard & Co as an off-the-shelf trophy at an original cost of £100. In itself, the Cup is not really worth a great deal but it makes this list simply because its prestige makes it invaluable and, as sporting trophies go, surely none has seen more money spent in attempts to win it? 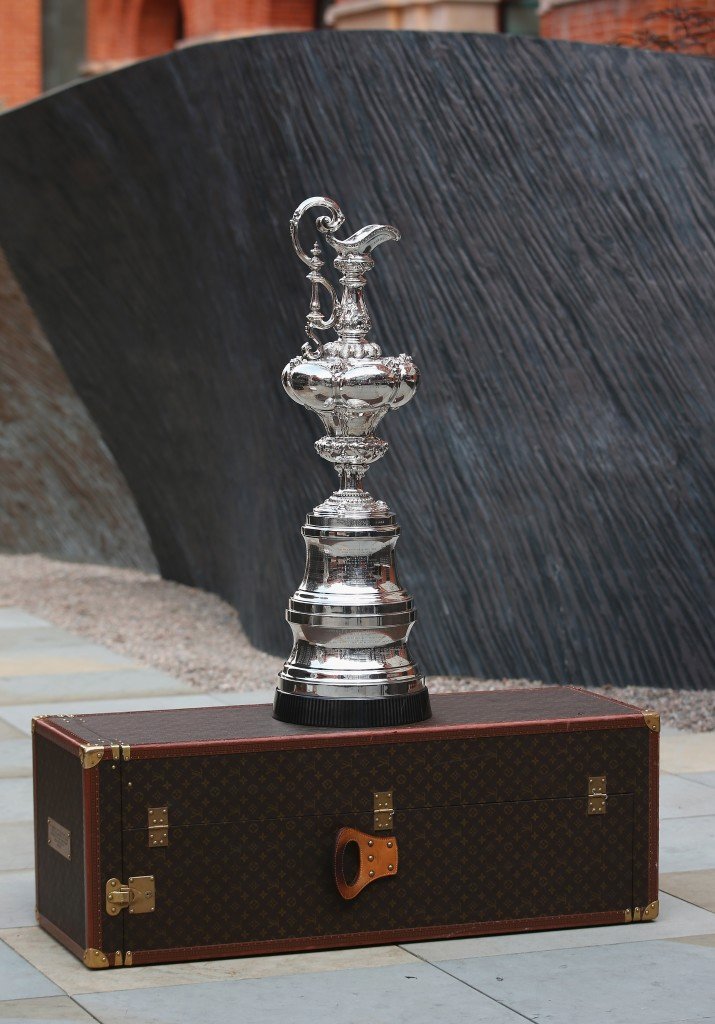 Olympic Gold Medals – not particularly valuable in themselves – those awarded at the 2014 Sochi Winter Olympics are worth around $600 in bullion value – Olympic Gold Medals can achieve huge prices at auction as these two examples show. In 2012, boxer Wladimir Klitschko sold his gold medal for about a million dollars while In 2013 one of the golds won by Jesse Owens at the 1936 Olympic Games fetched $1,466,574.

Woodlawn Trophy – the bullion value is around £5,000 but its insurance value is said to exceed £2.5 million.

The Master’s – winners receive a replica of the Master’s Trophy valued at about £6000 but, according to Golfweek in 2011, to buy a trophy that was awarded to a player would set you back at least $300,000 (around £200,000). The original, which sits in the Augusta clubhouse, is made of silver and weighs about 15.88 kg giving it a bullion value of £5800, but to the golfing world it’s priceless.

All Images in the above blog are courtesy of Getty.

Does Cryotherapy Work For Rugby Athletes?

British & Irish Lions: Who’s in and the National…

Building Lower Body Strength From the Foundations Up

The Story of a Canterbury Irish Jersey

Canterbury’s Return to Elite Cricket in the UK